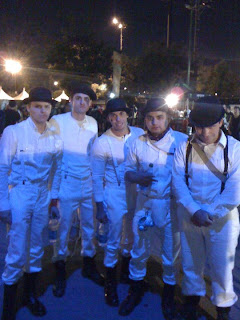 So I went to a rave a few weeks ago because, you know, why not.
It was an illuminating experience. First and foremost, I suppose, I learned that I am just way too damned old to go to raves anymore. Don't get me wrong! I had fun, the dancing was great and Moby's certainly a heckuva DJ. But the kids dancing around me, those young, fresh-faced little college kids who'd come to the event in their parents' borrowed Nissan Ultimas, wearing shiny costumes that they could just barely afford on the wages from their crappy afterschool jobs selling frozen yogurt at the local Red Mango. Those kids! A basketball stadium teeming with youth, every glowstick-bedecked head a quiet, bobbing sentinel, a vessel for a pair of piercing, intense eyes all focused on me, on my gray hair. Watching me. Judging me.

And I went to this thing and as I sat there in the limo I thought I'm going to challenge strangers to rock, scissors, paper because how cool and random would that be? To be standing there, alone, a sad anonymous face in a sea of thousands and then BLAM you're fighting for your honor in an intense, low-stakes game of Roshambo. What a delightful, unexpected little bit of oddity it would be in an otherwise staid and ordinary dance-hall extravaganza. Who wouldn't love to break the monotony of a massive dance party with a little bit of light person-to-person interaction?

I'll tell you who. Everyone at the goddamn rave. And not for my lack of effort! Time and again I would meet some stranger's eyes, hold out my hands in the traditional challenge stance, and wait for their response. Which was usually a vacuous gaze that, when roughly translated to English, means "Huh?" After a bit of gentle prodding they'd figure out what was going on and then, slowly and confusedly, they'd put out their hands. And play one, solitary, polite round. Then the hands went down, the head turned, and it was back to staring at the DJ, swaying mindlessly to the beat.

What the hell?! I get that you don't know me, but why not take advantage of a simple chance to inject a little weird into your life? A simple, no commitment opportunity to do something ever-so-slightly out of the ordinary and you dismiss it out of hand because it's not on the printed setlist. You boring jerks. 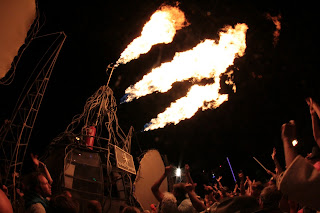 Last summer a few of us were dancing at Burning Man, at Opulent Temple (one of the bigger dance venues featuring, as pictured at right, flamethrowers on the DJ booth). A woman approached us and, as we danced there heedless of our surroundings, she took a moose out of her backpack. A small, dancing moose, which she placed on the ground and made an impromptu part of our dance circle. She left it there for a few minutes and the moose gyrated happily away, outdancing all the rest of us. I loved that moose. That one simple little moment, a pointless bit of randomness, made my evening. I want more of that and goddammit, world, I want you to help me.
Disgorged by Seph at 4:38 PM